The open war between Pep Guardiola and Yaya Toure has its origin mainly in the second season of the coach in Barcelona, which led to the second League title with Pep and meant the farewell of the Ivorian at the end of the course. The midfielder was key with Guardiola, where he played in 43 games and scored 3 goals, one of them of very beautiful in the Copa del Rey final against Athletic.

The appearence of Busquets in the first team meant that Guardiola saw him as the ideal player to occupy the pivot position ahead of the defence, for his ability to steal the ball and distribute the play from the back. The arrival to the squad moved Toure to the defence for a few games, where he played as central defender in the Copa del Rey final and in the Champions League final.

Deciding between Busquets and Touré

The following season, Guardiola returned to have Busquets and Toure for the midfield. The Spaniard took part in 52 matches and Toure in 37. At the end of the course, Dimitri Seluk, agent of the player, met with Manchester City for the lack of transcendence and opportunities for the player and the transfer between the clubs would be finally agreed for 30 million euros. 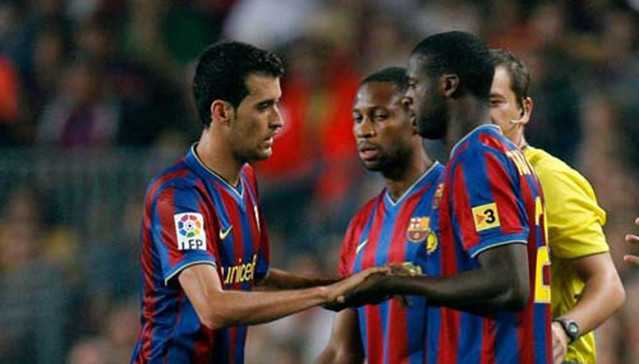 Despite the fact that Touré was in accordance with the sale, he always commented that he felt Barcelona very deep in his heart and did not close the doors to a return in the future. However, the Ivorian pointed out that the lack of personal relationship with the coach made him feel undervalued, and decided to pack the suitcase to the destination of the Premier League, the team where he played his brother Kolo. He also had a word about its competition with Busquets, who in many cases moving from the position where there was always played at Barcelona: “He has a great quality, but what I need is to play games and not stay on the bench. I have won everything and I need new challenges”.

However, the vision of Guardiola was very different, because as he explained, “the doors of my office were always open. The reality is that he asked Laporta to leave. If we cross with City in the Champions League, I will talk to him.”

Their paths diverged and the two of them was well on their side. In the following course Guardiola won his third League as a coach, his second Champions League and the Supercopa of Spain. Touré became a staple piece for Manchester City in a most advanced position and his number of goals and assists greatly increased, with 24 goals scored. Their reunion on the English team has been marked by controversy after Guardiola did not including the Ivorian in the Champions league and the player decided to stay anyway in the team.